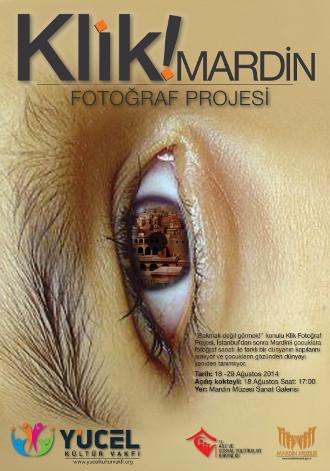 The first KLIK! Photograph project has taken place in Istanbul working together with Istanbul Metropolitan Municipality but the second one, by crossing the borders, has reached to Mardin. KLIK! is a traditional project of the YKV where each time different groups receive a photography course which is followed by a fieldwork permitting the first analogue camera experience to the participants. The second KLIK! Photograpy Project that we organized in August has been realized with the support of Mardin Museum and Mardin Institution for Protection of Children.

In the framework of this project, children of the age group 9-18 staying in Musa Cihaner Youth Cottage, linked to the Mardin Directorate of the Turkish Ministry of Family, received photography workshops. After their education, several areas of cultural importance have been chosen for practice: Dara Antic City, Madrasahs of Zinciriye and Kas miye, Sipahiler Bazaar, Kirklar Church, Ulu Mosque, Mesopotamia Valley. Also the historically picturesque Mardin Artuqid lanes, historical houses and social life have been framed into photographs.

During the Klik Art of Photography Educational Workshops, the emphasis is put on composition, narrative, collage, drama and basic photography techniques. The aim of the project was to enrich children's perspective on nature and life through photography, to develop their visual memory and to teach them how to see rather than look. During the fieldwork where the students applied different techniques of photography, they not only had the opportunity to meet with the city's historical heritage, but also to develop their skills to picture the internal spaces and outdoor spaces using the sunshine correctly.

The project has been followed by the great interest and excitement from the part of the people in Mardin. The participant children were very motivated for the Art of Photography that we noticed through their questions during the fieldwork, their studious work and presentation. An exhibition of the work is opened in the Art Gallery of Mardin Museum and met its first visitors on the 18th of August where the special opening's cocktail has taken place with the participation of the Mardin City Governor Mustafa Ta kesen.